Giving Back Through Franchising 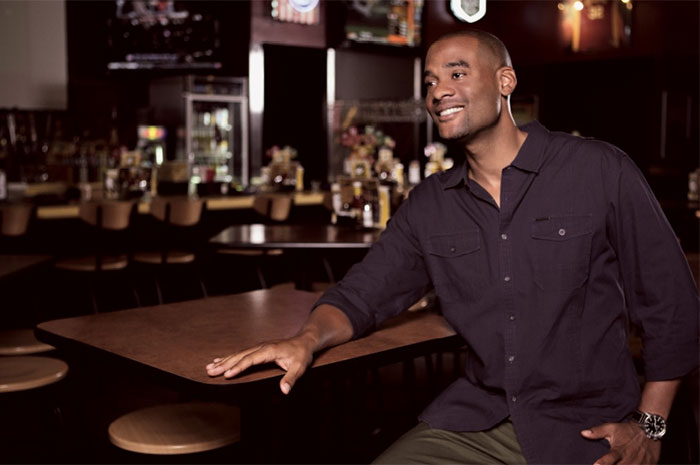 Giving Back Through Franchising
How many of us had an influential boss in our lives? In some form or another, they worked to shape us into the person we would some day become. It might have been as small as honing your work ethic. Maybe it was on a larger scale, such as helping you learn the ins and outs of credit cards. Perhaps they gave you a chance to prove yourself, whether they knew it or not. Bosses, in many ways, can make or break a person in the workforce. Especially with a first job, or when working as a teenager.
Which is exactly why one boss is continually going out of his way to help his workers succeed. Karim Webb, owner of a Buffalo Wild Wings in Los Angeles, has taken his “boss” duties to another level. Not only does he mentor and coach his workers into finding successful careers for themselves, he’s working to do the same for those who have never set foot into his restaurant. As well as putting in methods to cut down bad behavior inside his BWW location, such as banning gang colors and the checking of backpacks.
Because Webb’s location sits in a dangerous part of town, he’s seen it as his duty to help make the streets safer for everyone involved. Working through his own restaurant, and taking his personal time to knock on doors and spread the word about being safe. [Franchise Times]
Making a Difference
It’s efforts like these, along with countless others, that have been able to advance the workforce into something positive. Without intervention such as Webb’s, especially in bad neighborhoods, it’s likely that a number of kids would go down questionable paths. But through hard work and with the help of role models, bosses of all kinds work to reverse these negative influences.
Franchising for a New Start
Teenagers aren’t the only ones who can benefit from franchising ventures. Those of various backgrounds and experience levels have found light by working in a new career. One that utilizes their skills, sees results, and allows them hands-on work each and every day. Opening a restaurant has also been seen as a great secondary career for that very matter. Plus, it’s a viable option for those who have retired, or who want to branch out into something different.
The opportunity for secondary aspects, such as the ability to help employees, as Webb does, has also provided emotional satisfaction for restaurant owners. Some opt to donate items or funds in order to help others, but those who give their time to help young workers have cited much higher levels of satisfaction. Because not only are they sharing their knowledge base, they’re doing something to help the upcoming generation. A trait many franchise owners have stated can’t be given any type of value.
Whether you already own a franchise (or multiple franchises) or are considering stepping into this career, keep in mind these opportunities to give back. It can serve as a way to pick up good PR for the brand, or to find tax cuts come April 15th. But more so than that, it’s been proven as a great way to influence younger workers and to guide them onto fulfilling career paths of their own.