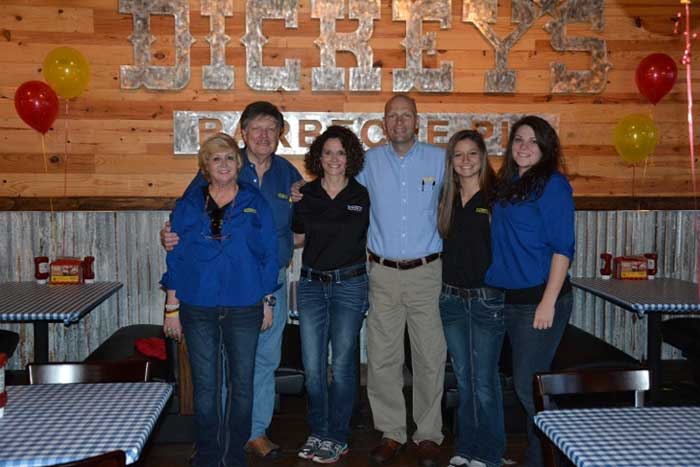 Running a restaurant is very much a team effort. You’re only as strong as your weakest member, and everyone has to put in the work to get it right. Everyone. Including the boss. At least that’s John Lockett’s take. The owner of two Dickey’s Barbeque restaurants in the Mississippi Gulf area (with two more in the works and multiple others under contract), he said there’s no success without hard work. A tactic he learned from his 22 years in the military.

“When you’re running a restaurant it’s all about leadership,” he said. “Whether you’re managing a schedule or managing not running out of mac and cheese.” And as a retired lieutenant colonel and airfield control operations officer, he’s had plenty of experience in the way of organization. Skills that now translate into serving barbeque to hungry (and happy) customers.

Though its far different from his previous gig, Lockett said running one’s own company is a fulfilling experience. One that comes with challenges, but offers ongoing business and a sense of accomplishment.

“I knew I wanted to start my own business and do something more entrepreneurial,” he said. “The restaurant business is hard but it’s renewable; people need to eat every day.”

Joining with Dickey’s, however, was no rash decision. After deciding to branch out into hospitality (Lockett even worked as a personal trainer to see if he wanted to open his own gym, but ultimately passed due to the large amount of overhead required), he began researching company models. And after talking with a representative at Dickey’s, he was hooked. Not only was it the barbeque that drew him in, it was the business model. For instance, offering catering, letting kids eat for free on Sundays, and free soft serve with every meal. In fact, he’s told every week that families come because picky kids refuse to eat anywhere else. A trait he said is extremely rare in barbeque, and one he’s proud to be a part of.

Currently, Lockett is contracted with the company for 10 restaurants in the Mississippi Gulf area – a number he quickly jumped toward after his initial two, and a brief stint with five. Due to his success and work ethic, he said he was excited to continue his restaurant reach. Though he also said it’s important to do so in a timely manner.

“Once you go into a model that successful other investors want a piece of the pie,” he said. “You have to stay aggressive with your development plan.”

Ideally, Lockett said he’d love to open a restaurant a month (jokingly). However, Lockett emphasizes that it’s more important to stay reasonable and practical with one’s plan and create a model for success, not just one that’s out for artificial growth.

“You can’t open 10 [restaurants] until you open one,” he said. Also adding that it’s important for him to find a balance between work and family.

Lockett was quick to point out that all of his success wouldn’t be possible without the help of co-workers. Both his actual family (he works with multiple relatives), and those he’s met while hiring.

“I have the best employees ever. We try and treat everyone like family,” he said. “I’ve always taken care of my troops and here it’s no different. They’re my restaurant troops and I want to take care of them the best that I can.”

However, finding the proper troops didn’t come naturally … at least at first. Through trial and error he was able to find a working groove both within the restaurant, and when looking to hire others. Stating that, in the beginning, franchisees don’t always know what they’re looking for, or what they should be looking for.

“It was more difficult at first but then you begin to normalize,” he said.

Now, after a year and a half in the business, Lockett is still going strong. Even encouraging others through the sense of accomplishment of owning one’s business. He also offered advice for future franchisees – starting with work, work, and more work.

“You need to be ready to work harder than you’ve ever worked before; running a restaurant is not for the weak or the weary,” he said. “You have to stay continually involved and working with your people. No one is going to care about the brand as much as you will, and you need to pass that along.”

Not that that should stop anyone, “I’m living proof – if I can do it, anybody can do it.”