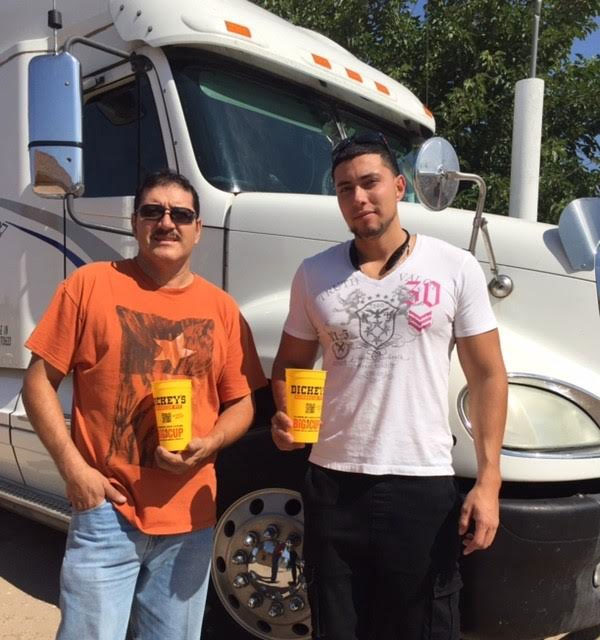 Father-Son Team Plan to Open Three New Dickey’s Locations
(El Paso, TX) El Paso will soon get three new Dickey’s Barbecue Pit locations, according to a development agreement recently executed between the nation’s largest barbecue chain and franchisees Hilario and Hugo Gonzalez. The first location is slated to open by Fall 2016, with the other two stores to follow in the next consecutive years.
An El Paso native, 24-year-old Hugo Gonzalez entered into this business venture with his father Hilario. Having worked in his father’s trucking business, Hugo became interested in business ownership and foodservice. He researched 10 different restaurant franchise concepts, but chose Dickey’s for the great support and low startup cost. “We only have two barbecue restaurants in El Paso, and I wanted to open a fast casual location where guests can get great barbecue without the time it takes to visit a full service restaurant,” Hugo says. “We look forward to serving lunch and dinner at our Dickey’s locations, as well as catering events in our community.”
“Dickey’s is proud to expand our presence in our home state,” says Roland Dickey, Jr., CEO of Dickey’s Barbecue Restaurants, Inc. “We currently do not have a Dickey’s location in El Paso, and we congratulate Hugo and Hilario Gonzalez on bringing the brand to West Texas.”
To find the Dickey’s Barbecue Pit nearest you, click here. Find Dickey’s on Twitter,  Facebook and Instagram.
About Dickey’s Barbecue Restaurants, Inc.
Dickey’s Barbecue Restaurants, Inc., the nation’s largest barbecue chain was founded in 1941 by Travis Dickey with the goal of authentic slow smoked barbecue. Today, all meats are still slow smoked on-site in each restaurant living up to the company tagline, “We Speak Barbecue.” The Dallas-based family-run barbecue franchise offers a quality selection of signature meats, home style sides, tangy barbecue sauce and free kids’ meals every Sunday. The fast-casual concept has expanded to more than 550 locations in 43 states. Dickey’s was recognized for the third year by Nation’s Restaurant News as a “Top 10 Growth Chain” and by Technomic as the “Fastest-growing restaurant chain in the country.”
0
Add Franchises To Basket<br /> For Free Information
Request Free Information